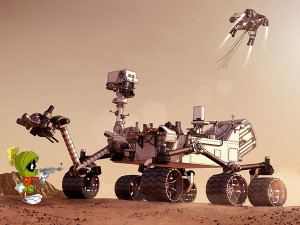 Are you all happy with the NBC “This is all your friends will care about for the next two weeks” presentation of the things-that-happened-in-London-several-hours ago? Hm?? Have you
gotten your fix of archery, fencing, trampoline, badminton, table tennis and jacks and hop-scotch and tiddly-winks? After watching 70 hours of people splashing around in pools, and having that Ryan
Seacrest fellow interview Michael Phelps’s mother for 22 straight hours, we’re now on to the runny-jumpy week of these things, and by the end of it all, we will have determined once and for all what the Greatest Nation On Earth is. (It is China).

While NBC has allowed us to watch these Laff-a-lympics like it was
1992, other important things have happened in the solar system! It’s
true. Just ask Michael Phelps’s mother’s hairdresser, like Ryan
Seacrest just did. First of all, MARS PEOPLE. We blasted a robot car
from the Sharper Image to Mars, because why not. Late on Sunday night,
JPL geniuses eased that sucker down using parachutes and rockets
because we, as taxpayers, simply did not want to use valet parking.

Or at least that’s what they say is Mars. Looking at the photos again,
I’m not so sure. After all, that moon landing we faked in 1969 was
pretty darned popular. All we really saw Sunday night were nerds
going wild, and you can get that effect just by announcing a new
season of Firefly, amiright? For the cost of a few dozen Geek Squad
blue shirts and a crappy webcam smeared with Vaseline, you too can
fake that Mars landing. “SURE THAT’S MARS. IT IS TOTALLY NOT THE
ABANDONED LOT NEXT TO FRANK’S DRIVEWAY *snert*,” they said at the 3:30
am press conference that nobody saw.

Anyway, everybody agrees it was a glorious moment for Science, at
least until Science says things like climate change and evolution
could be real things. DEFUND NASA, THE END.

Why not continue to wonder about other worlds like London and Mars
tonight at PHH? What better place can we steer our rovers to this
week than the *Red Rock* Tavern around 9 pm? This will correspond to
Ryan Seacrest’s touching interview with Michael Phelps’s cousin’s
girlfriend’s 8th grade teacher, taped yesterday. Hooker Brewery’s
Mars Red Ale will flow along with Olympic Ring Fries.

One thought on “PHH: total recall”